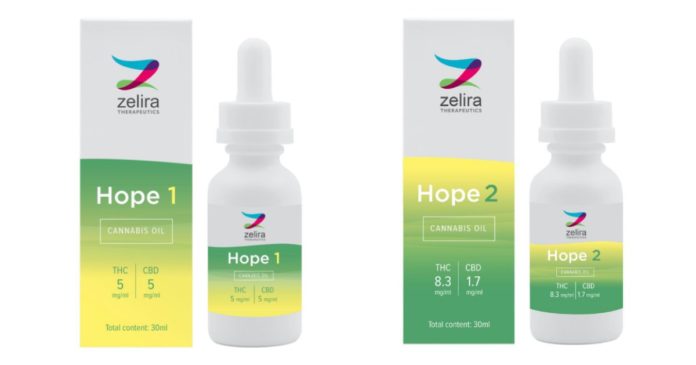 The company has two proprietary formulations under the HOPE brand that are already use in the U.S. state of Pennsylvania and have been licensed in Louisiana. The active ingredients in HOPE 1 are 5mg/ml of both tetrahydrocannabinol (THC) and cannabidiol (CBD), while HOPE 2 contains 8.3mg/ml THC and 1.7mg/ml of CBD.

“Following the success of the HOPE™ launches in Pennsylvania and Louisiana we are excited to make these products available to patients and physicians in Australia,” said Dr. Richard Hopkins, Managing Director ex-USA. “This represents another key milestone in our commitment to bring the benefits of HOPE™ to patients in global markets.”

The HOPE products will be distributed nationally via Health House Holdings.

In September, Zelira announced that another of its proprietary cannabinoid medicines, Zenivol (previously referred to as ZLT-101), was also available via the TGA’s Special Access Scheme.

Zenivol, which contains 20mg/ml of THC, 1mg/ml of CBD and 2mg/ml of (Cannabinol) CBN*, was developed for supporting chronic insomnia patients who have found other medications unsuitable.

The TGA’s Special Access Scheme (SAS) enables appropriately authorised health practitioners to access therapeutic products not included in the Australian Register of Therapeutic Goods (ARTG). There are several SAS pathways, but medical cannabis applications are generally via Category B.

Things have been getting very busy for the TGA on this front – it approved just over 6,200 applications in September, bringing the total to 35,428 for the year to date compared to just 13,799 applications to the same time last year.

For further information on accessing medicinal cannabis in Australia via the SAS, see this page.

*Cannabinol is a mildly psychoactive cannabinoid found only in trace amounts in cannabis. THC, CBD and CBN are just three of the many cannabinoids cannabis contains. Check out our big list of cannabinoids.